On Syria, U.S. violates international norms in the name of upholding them 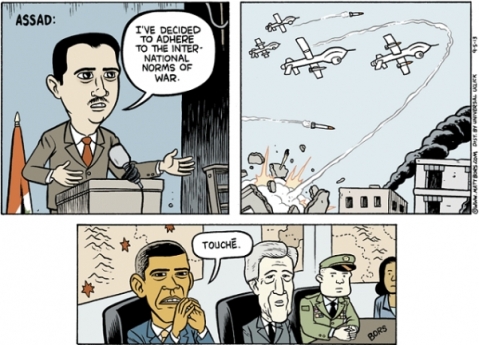 With all the twists and turns that the U.S. push for military action against Syria has taken over the past couple weeks, it’s easy to forget that the threats of missile strikes that have dominated the international discussion this month have all constituted significant breaches of international law, especially the following provision of the United Nations Charter:

All Members shall refrain in their international relations from the threat or use of force against the territorial integrity or political independence of any state, or in any other manner inconsistent with the Purposes of the United Nations.

U.S. President Barack Obama has skirted this issue by appealing to the international community’s sense of moral outrage over the chemical weapons attack allegedly carried out by the Syrian regime last month. Underlying the debate is the argument that the U.S. and broader international community must maintain “credibility” in order to uphold “international norms,” especially the ban on chemical weapons (even though Syria has denied using the weapons and furthermore has not acceded to the Chemical Weapons Convention which prohibits their use).

The legal justification for such an attack would presumably be the relatively new international concept of “responsibility to protect,” which does not carry the weight of law but does provide a framework for using tools that already exist, including mediation, economic sanctions, and the UN Charter’s chapter VII powers, which detail criteria the UN Security Council can invoke to authorize military action.

The bottom line though is that the threat or the use of force without Security Council authorization is strictly prohibited under international law, so every time that President Obama or Secretary of State John Kerry have issued threats over the past two weeks, they have been violating the UN Charter. The irony of course is that in violating this international law they have been claiming the moral high ground, insisting that military action is necessary in order to defend international norms.

Nowhere in any international law however does it state that the U.S. is designated as the world’s policeman tasked with enforcing international norms. Indeed, as this blog has documented for two and a half years, there are few countries in the world that violate international norms as routinely and comprehensively as the United States.

On issues ranging from fair elections and corruption to the rights of women and children to police brutality and prison conditions to arms control and military interventions, it is difficult to find a single country with as troubling a track record as the U.S. While other nations might have more problems adhering to certain aspects of international norms — such as North Korea’s slave labor camps or Syria’s attacks on civilians — one would be hard-pressed to find another country in the world that flouts international obligations as routinely and comprehensively as the United States.

What other nation on earth for example has recently traveled half-way across the planet to invade another country based on utter fabrications, as the U.S. did a decade ago in Iraq? What other country sends unmanned aerial drones across the borders of sovereign nations against their stated wishes and kills countless innocent civilians? No one.

One of the many ironies regarding the U.S. push to war with Syria is that the entire pretext for the war has been based on the allegation (so far unproven) that Syria violated the Chemical Weapons Convention, despite the fact that Syria has never signed or ratified this treaty. The U.S. has repeatedly claimed however that because the vast majority of the world’s countries have agreed to the ban on chemical weapons, it has essentially become a binding international norm.

If the same principle were applied to the United States, the international community (or a self-appointed global policeman such as China) would be within its rights to shoot cruise missiles into American cities every time the U.S. allegedly violates a treaty it has not subscribed to, such as the Cluster Munitions Convention or the Convention to Eliminate All Forms of Discrimination Against Women or the Convention on the Rights of the Child.

All of these treaties have been agreed to by the vast majority of the world’s nations, making them customary international law by the standards the U.S. has been applying to its case for war against Syria. The Convention on the Rights of the Child, for example, has been ratified by every country on earth except for the United States and Somalia.

Even when it comes to the Chemical Weapons Convention, which the Obama administration has been citing when arguing for missile strikes against Syria, the U.S. itself is in violation of its core provisions.

The CWC prohibits “the Development, Production, Stockpiling and Use of Chemical Weapons,” yet the United States maintains stockpiles of several thousand tons of these banned weapons (despite having subscribed to the treaty in 1997).

Although it looks for now that the U.S. drive to war against Syria has been halted thanks to the diplomacy of Russia, the hypocrisy and double standards that formed the basis of that drive to war remain at the core of U.S. foreign policy.

If we are ever to have the sort of international system that can appropriately respond to crimes against humanity such as chemical weapons attacks against civilians, significant reform is needed of the UN system as well as general respect being shown for international norms by the world’s powers – especially the United States as the self-appointed global policeman.